Just Open the Eyes and See

On a certain planet, there was a species of somewhat hairy sentient animals that were born with their eyes shut. The thing was, it simply didn’t occur to this species that after a while, they could open their eyes and see the beauty (or indeed ugliness) and color of the world they inhabited.

They weren’t blind, as they could see colors and patterns on the inside of their eyelids, as well as light and dark. They’d evolved a way of living with this condition, even if it was rather uncomfortable and inconvenient in many ways, especially when they tripped over the children.

Occasionally it would happen that, more or less by accident, one of these somewhat hairy sentient animals would slightly open their eyes (often a reflex action after tripping over one of the children).

But the resulting sense of unwanted brightness and color would usually seem so weird and disturbing that they’d put it down to some funny kind of migraine or whatever, and dismiss it.

However, a few of these creatures had been heard to proclaim that they believed this migraine thingy was actually some kind of ‘true seeing beyond seeing’. This seemed preposterous to many, who called themselves ‘aseers’ but plenty of others believed there was something in it.

Some of them belonged to various (competing and mutually acrimonious) sects that all claimed in one way or another that if you denied yourself whatever you enjoyed, believed you were ‘Seen’ by the ‘All Seeing Bestower of True Seeing’ and made supplications and offerings to It, then by It’s grace you’d be able to Truly See. But only after you died.

Others offered structured ‘Ways to Seeing’ and a ‘Path to Real Seeing’,
involving meditating on developing good qualities,
getting into amazing superconscious states,
becoming a better and nicer somewhat hairy sentient animal,
cultivating your ‘inner seeing muscles’,
imagining what ‘seeing might look like,’
and talking about it endlessly with other ‘aspiring Seers’.

Or more often talking about just about anything else as this ‘seeing’, to be honest, sounded … well, a bit kind of boring.

Actually, there were endless views and debates going on about so-called ‘seeing’, and what it may or may not mean.

There were, of course, some who said that their “eyes were open” and that “they saw”. But what they described as being seen – like distinct shapes and many shades of different colors – made no sense at all to normal right-thinking somewhat hairy sentient animals.

They knew that everything visual was somewhere between reddish and blackish and there was no such thing as a distinct shape. Clearly, they thought, these so-called “seers” were deeply deluded.

Worst of all, and most widely ignored, were the ones than not only said they could see, but that all anyone else had to do was open their eyes. “It’s the simplest thing possible, just open your eyes!” they’d say.

“What do you mean by ‘open’?” the shut-eyed ones would reply, “The concept of ‘open’ is deeply ambiguous and open to a number of philosophical interpretations. Come to that, what do you mean by ‘eyes? ‘ – whatever organ perceives the red-to-blackness of the world is clearly single, so all this seems very confused thinking and anything but ‘simple’ to us.”

Just now and then, however, one of the somewhat hairy sentient animals would think ‘what the heck, maybe they’re on to something, there’s no harm in giving it a try’ and … just open its eyes.

Then, everything changed, forever. 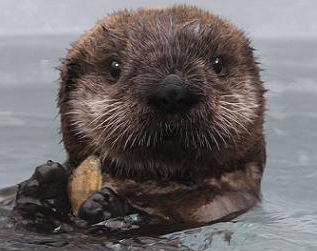 This post was written by Jowate. Thanks to him for it in its entirety!

Edited only to fit blog format and American English style.

The pups with closed eyes are from here: http://news.discovery.com/animals/baby-otter-cubs-born-110705.html

The second photo is from here: http://mlkshk.com/otter/before/GSOF